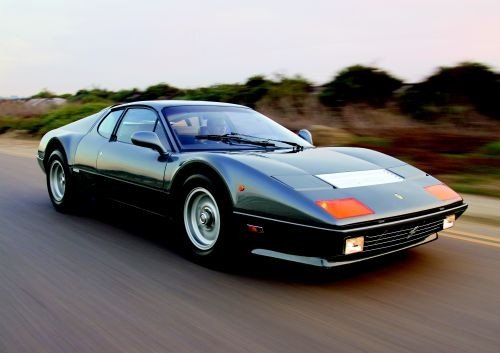 At its debut at the Paris Show in 1976, the 512 BB was equipped with a 5-litre version of the 12-cylinder boxer. The new engine proved a great success, giving the same power at lower revs, better torque and a smoother delivery than the earlier version in the 365 GT4 BB.

The Pininfarina coachwork differed only slightly from the previous model in certain details which not only made it look even more elegant but also helped improve engine cooling.

Visually the differences between the 512 BB and the 365 GT4/BB were mainly around the nose and tail. The lower nose panel now incorporated a chin spoiler, and at the rear the triple tail light assemblies and triple exhaust pipes gave way to large twin circular lenses and paired twin exhaust pipes. The twin tail light arrangement mirrored that shown on the original prototype displayed at the 1971 Turin Salon. The mesh tail panel of the 365 GT4/BB was replaced by a satin black finished horizontally louvred panel, with further changes to the louvre arrangement on the engine lid. The body sides received NACA ducts forward of the rear wheel arches to cool the exhaust system, whilst the rear track was increased from 1520mm to 1563mm.

The body was mounted on a 2500mm wheelbase chassis, that had factory reference number F 102 BB 100, and all were numbered in the odd chassis number road car sequence. The construction followed the same principles as that of the 365 GT4/BB of a tubular steel chassis frame with a monocoque central cell. Again as with the 365 GT4/BB, the 512 models were available in right or left hand drive form, but no USA market versions were ever made. The standard road wheels were alloy five spoke “star” pattern, with a knock off spinner on a Rudge hub, although legislative requirements in some markets dictated the fitment of a large octagonal hub nut. The wheels covered large ventilated disc brakes with twin hydraulic circuits, and servo assistance.

Independent suspension was provided all round, via wishbones, coil springs, and hydraulic shock absorbers, with twin rear units, together with front and rear anti roll bars. The flat twelve cylinder engine was of the same configuration as that fitted in the 365 GT4/BB, but with a cubic capacity of 4943cc, and 82mm x 78mm bore and stroke, with factory type reference F 102 B 000. It featured belt driven twin overhead camshafts per bank, with the basic construction, operating principles and layout of the engine and transmission, apart from the adoption of dry sump lubrication and a hydraulically operated clutch, the same as the 365 GT4/BB. The 512 BB was fitted with four triple choke Weber 40 IF 3C carburettors, with a single distributor, driven off the left rear inlet camshaft and electronic ignition system, to produce a claimed 340 bhp.

Although the earlier 365 GT4/BB produced more power than its later relative, the larger engine offered greater torque and improved driveability.

The Berlinetta Boxer had a competition career from the late seventies into the mid eighties, mainly instigated by the concessionaire for the USA, Luigi Chinetti. Their main hunting ground was the GT category at Le Mans, and from the early lightly modified road cars, he persuaded the factory to develop a racing version, the 512 BB LM, which was built at Ferrari’s Assistenza Clienti in Modena, with radically different bodywork developed in Pininfarina’s wind tunnel. They were built in two small series for private clients, but they were never raced as works team cars.