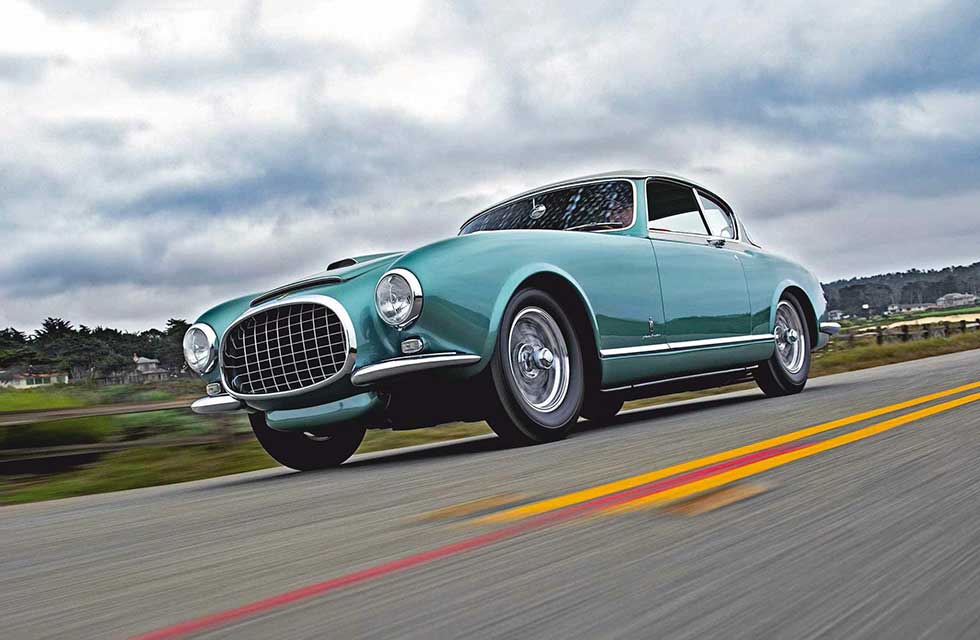 Interest in Ferrari in the 1950’s was growing among potential clients, but some were wary of the competition levels of performance provided by engines which reached the market with very little in the way of de-tuning them.

So as to meet the needs of this type of Client, Ferrari introduced the 342 America, a more accommodating four-seater featuring a more flexible engine, a new synchronised 4-speed gearbox and more user-friendly handling. However, they were fitted with a surprising array of different coachwork, ranging from a development of the classic barchetta body style by Carrozzeria Touring, to quite staid three-box 2+2 coupés from the house of Ghia, with a selection of Vignale interpretations thrown in along the way.

All models in the 340 and 342 America series, whether destined for competition or road use, carried chassis numbers in the even competition car sequence, even though the latter models were all clearly road cars.

Production of the 340 series ran into 1952, when the 342 America model was phased in. Although the change in model reference number (which referred to the swept volume of a single cylinder) would appear to indicate an increase in engine capacity but it didn’t. The engine was essentially the same 4.1 litre unit as fitted to the 340 model, although they can be visually identified by a different carburettor air filter arrangement.

The Lampredi-designed V12 engines are normally referred to as ‘long’ block, to differentiate them from the original Colombo design. The reason for this appellation was the spacing of the cylinder bore centres on each bank of the engine, which on the Colombo engine was 90 mm, and on the Lampredi engine 108 mm, thus increasing the overall length of the block.

The wider spacing was necessary to provide the facility for a larger bore diameter, and to incorporate a Lampredi design feature of having the wet cylinder liners screwed into the head. As with the Colombo-designed engine, the Lampredi unit featured a single overhead camshaft to each bank of cylinders.

The 342 America was produced for a relatively short period during late 1952, with only six examples made, one with a Vignale cabriolet body, and the remainder with a fairly homogeneous Pininfarina body in either coupé or cabriolet form. They were built on a 2650 mm wheelbase, tubular steel chassis, as opposed to the 2420 mm wheelbase of the 340 America and featured slightly wider front and rear track.