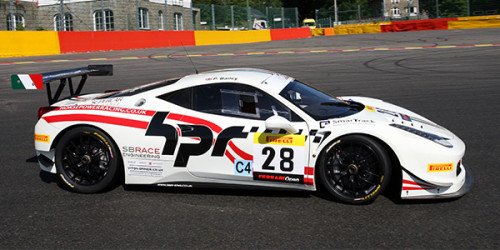 Following in the footsteps of the 348, the 355, the 360 and the F430, the 458 Challenge  is the fifth model fielded by Ferrari for the one-make Ferrari Challenge Trofeo Pirelli championship it organises for its sportier clients. The new 4499 cc V8 is the first Ferrari direct injection engine to be mid-rear-mounted.

Compared to the 458 Italia, the direct injection 4499 cc V8 remains strictly in production tune, with an output of 570 hp at 9,000 rpm. That said, modifications have been made to the gear ratios and calibration of its dual-clutch F1 gearbox to guarantee higher torque at lower revs.

The 458 Challenge is also equipped with the E-Diff electronic differential already employed on the road-going version, a first for Ferrari’s track-only cars. Significant weight reductions were achieved both in the car interior and externally: Two track-specific calibrations were developed with logics and control strategies evolved from the F1 and GT racing worlds and fully integrated with the E-Diff to maximise performance both entering and exiting corners.