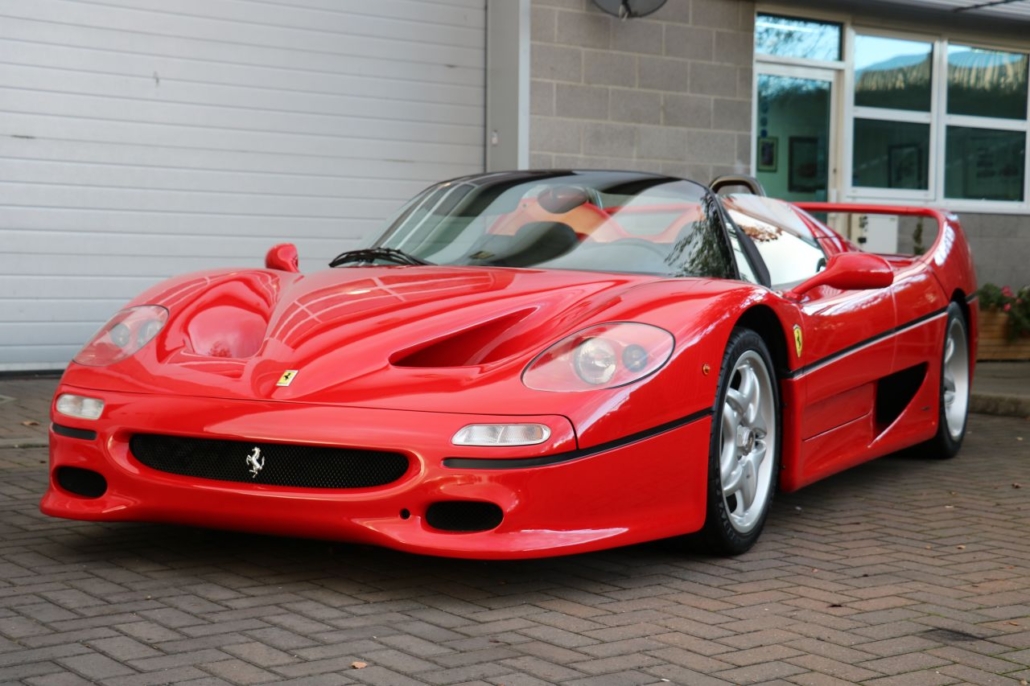 Created to celebrate Ferrari’s 50th anniversary, the F50 was the closest thing to a road-going Formula 1 car the company had ever built. Given its uncompromising, purist approach to high performance, the F50 was devoid of power steering, power assisted braking and ABS, but made extensive use of sophisticated composite materials, F1-style construction technology and aerodynamics.

Whereas the two previous “Supercars” had been powered by turbocharged V8 engines, the nineties variant used a normally aspirated V12 engine as the motive force, albeit more than fifty per cent greater in capacity than its predecessors. Similarly the earlier models had introduced increasing degrees of technology learned from the Formula One cars, particularly in the field of composite materials. The Pininfarina styling didn’t have the raw beauty of the F40, and bore little in common with any other Ferrari model, apart from the satin black finished side indent line and traditional paired rear light treatment. It had plenty of curves, intakes and exhaust slots, and an even more radical rear wing than the F40, but the body shape was more one of aerodynamic function than aesthetic pleasure. It did have a removable hardtop, so that the occupants could come even closer to the F1 experience.

The mid mounted engine was a 65 degree V12 unit fitted longitudinally and rigidly mounted to the rear bulkhead of the monocoque cell. A lightweight nodular cast iron block was used that featured integral Nikasil coated cylinder liners, whilst the connecting rods for the special forged alloy pistons were manufactured from titanium alloy. The bodies were mounted on a 2580mm wheelbase chassis, with a 1620mm front track and 1602mm rear track. The Cytec Aerospace carbon fibre chassis had factory reference numbers F 130 BD, and were numbered in the continuous chassis number road car sequence. The construction incorporated the rubber fuel cells within the structure between the passenger compartment and engine mounting points, and as with the F40 the body panels were all constructed from composite materials. There was a more generous choice of colour options on the F50, than on the “red only” GTO and F40, with clients having a choice of five colours to chose from, two different shades of red, yellow, black and silver, most opting for the racing red scheme.

Once again a USA market version was produced, and as with the previous two “supercars”, all market models were left hand drive.