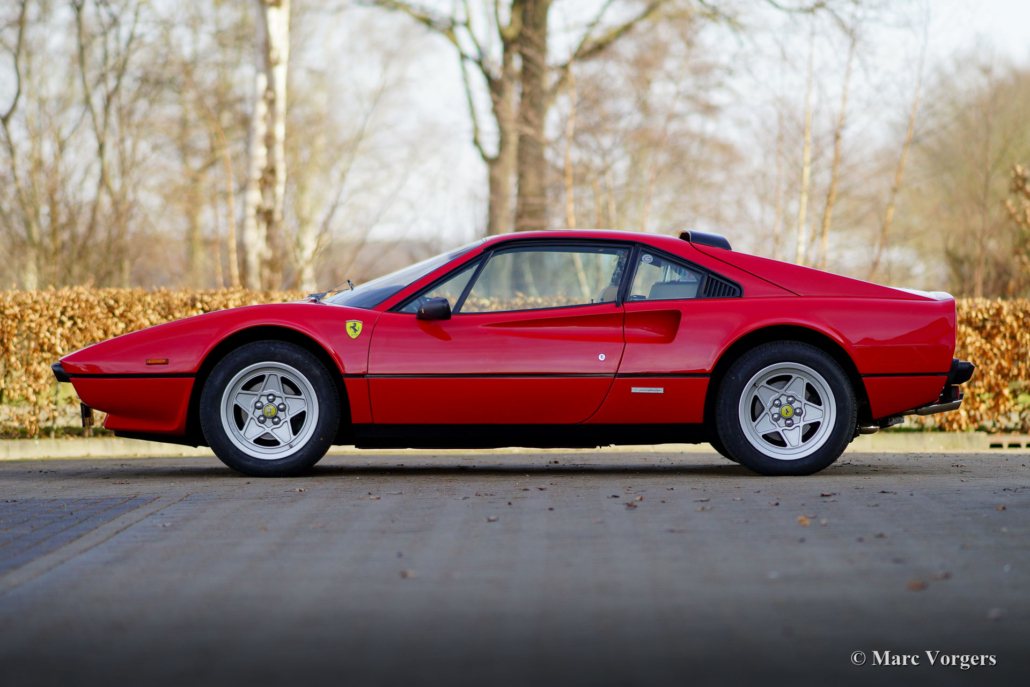 The transition from carburettor to fuel injection and the introduction of new anti-pollution laws all had a sizeable impact on the power of the 308 GTBi compared to its predecessor, the 308 GTB.

Research to remedy this situation was quickly undertaken and soon showed that four valves per cylinder offered the optimal solution. This innovation saw the engine make up its lost horsepower and the car regain position as the reference point in its category.

Visually the new model was very similar to the outgoing one, but could be recognised by the addition of a slim louvre panel in the front lid to aid radiator exhaust air exit, paired electrically operated door mirrors with a small enamel Ferrari badge on the shell, a revised radiator grille with rectangular driving lights at the extremities, and rectangular (instead of round) side repeater lights.

The interior also received some minor alterations, and cloth seat centres became available as an option to the standard full leather, whilst the leather rim satin black three spoke steering wheel featured a triangulated section around the horn push. As with the preceding series’ of 308 models, USA market cars could be identified by heavier bumper assemblies, and rectangular side marker lights on the wings.

The V8 engine was essentially of the same design as that used in the 308 GTBi model, apart from the four valves per cylinder heads. It was of a 90 degree configuration, with belt driven twin overhead camshafts per bank, having a total capacity of 2926cc, with a bore and stroke of 81mm x 71mm, with wet sump lubrication, bearing factory type reference F 105 AB 000 for European market cars. The claimed power output for main market European cars was 240bhp at 7000rpm, and 235bhp at 6800rpm for US market variants.

The engine was transversely mounted in unit with the all synchromesh five speed transmission assembly, which was below, and to the rear of the engine’s sump. The gear and final drive ratios were altered to suit the revised characteristics of the four valves per cylinder engine. It was fitted with a Bosch K Jetronic fuel injection system, coupled to a Marelli MED 803A Digiplex electronic ignition system, incorporating a coil, distributor and ignition module to serve each bank of cylinders. All US market examples were fitted with catalytic convertors.