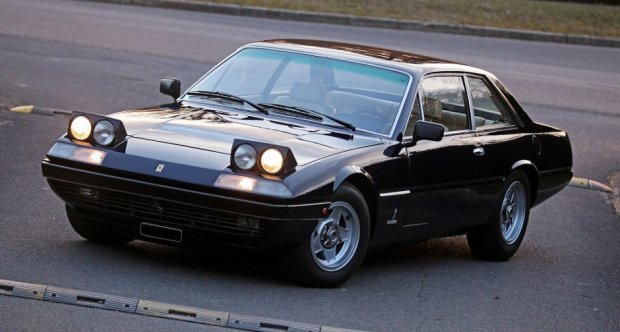 This was a brand new design from Pininfarina, which faced the task of developing a fast, svelte and elegant 2+2 powered by the classic VI2 engine that would break with the more classical lines of the 1967 365 GT 2+2 and provide greater rear seat space than that car’s successor, the 1970 GTC4.

The bodies were mounted on a 2700mm wheelbase chassis, which apart from the longer wheelbase and a slightly wider rear track, was virtually identical to that of the 365 GTC/4 model, with factory type reference F101 AL, and all were numbered in the odd chassis number road car sequence.

Internally it featured an instrument panel and centre console layout that was very similar to the preceding 365 GTC/4. However, externally the only common design elements were the twin retractable headlights in rectangular pods, five spoke alloy wheels, door handle design, and a triple circular rear light arrangement.

The engine was virtually identical to that of the 365 GTC/4 model, with twin overhead camshafts per bank of the 4.4 litre V12 unit, with wet sump lubrication, and side draught twin choke Weber 38 DCOE59/60 carburettors, with the same factory type reference number F 101 AC 000.

The bodies were built and fully trimmed at the Pininfarina works in Turin, and then shipped to the Ferrari factory in Maranello for the installation of the mechanical components. The body design is a relatively conservative three box shape, with a large cabin glass area, clean angular lines uncluttered by adornment, giving an impression of gentile refinement, exuding an air of sporting luxury. Only the long expanse of bonnet, the discreet Ferrari badges, including a chrome plated “Cavallino Rampante” in the centre of the under bumper radiator grille, and quadruple exhaust tailpipes, making any sort of power statement.