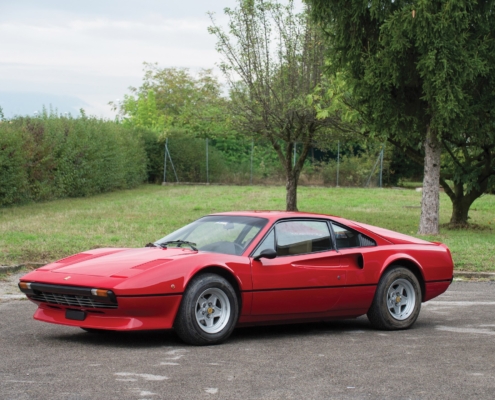 Built to a Pininfarina design by Scaglietti, it retained the 308 GT4′s V8, albeit with dry sump lubrication. The latter made for lower engine mounting and better cooling thanks to the fact that more oil was present.

The first models boasted fibreglass coachwork, one feature that was not immediately apparent, was that the 308 GTB was fitted with a totally fibreglass body, apart from the aluminium front lid.

This was the first Ferrari production car to feature fibreglass as a body material, and in fact the idea has not been repeated by the company in large volume production. However, individual fibreglass panels have been used on a large number of cars from then until now, particularly for the front and rear valances and nose sections.

Although the standard of finish was very high, a return to the more traditional pressed steel and aluminium happened in late 1976 for USA cars, and around mid 1977 for European models.

The transversely mid-mounted aluminium V8 engine was essentially of the same design as that used in the 308 GT4 model. The 308 GTB was developed into a successful rally car by Michelotto in Padova.

Apart from many successes in privateer’s hands in national rallies in Italy, there was also success on the international stage courtesy of the Pozzi Ferrari France team and their most successful driver Jean-Claude Andruet. They had back to back wins in the Tour de France Auto in 1981 and 1982, along with a number of other victories including the 1981 Targa Florio.