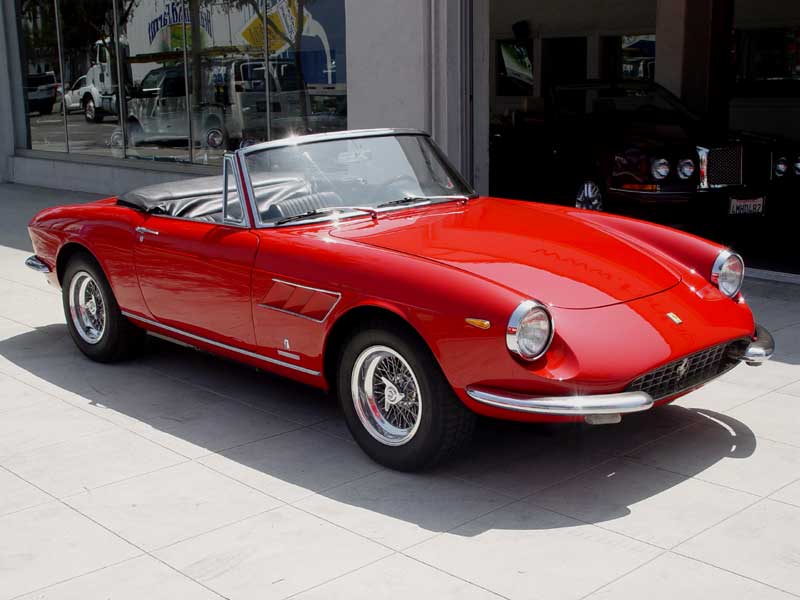 The sports car version of the 330 GTC, the GTS was presented at the Paris Motor Show in October 1966.

It had the same V12 running gear as the 330 GTC coupé which, in turn, was developed from the engine designed for the 400 Superamerica.

Pininfarina again came up with a very clean, elegant design which proved an immediate hit with the marque’s admirers.

The GTS helped Ferrari consolidate its reputation for building high-performance, luxury open sports cars. Apart from its folding roof, the 330 GTS was identical to the 330 GTC, and as with that model, were unusual for Ferrari in that they had a model badge on the boot lid, proclaiming ’330′.

Prior to this only a very few cars had any model identity on them, and those that did were normally ‘Speciales’. The nose featured a slim, projecting ovoid radiator grille, headlights in shallow recesses in the forward face of the wings, which had triple louvre engine bay exhaust outlets in their sides, bounded by a slim bright trim strip on three sides. This was married to a tail section that was first used on the earlier 275 GTS, to produce a harmonious, light and elegant design that featured slim quarter bumpers at each corner.

The folding roof of the 330 GTS was retained by a pair of over-centre clips on the top screen rail when in the erected position, whilst a clip-on protective vinyl cover fitted over it when stowed in a recess behind the seats.

Production of the 330 GTS model continued into late 1968, when it was upgraded with a 4.4-litre engine and minor cosmetic changes, to become the 365 GTS model.

It was produced in both right and left hand drive form, in the odd number chassis sequence used at that time, and 100 examples were produced in the chassis number range 08899 to 11713.

The bodies were mounted on a 2,400 mm wheelbase tubular steel chassis with factory reference number 592, and the principal layout was very similar to that of the concurrently produced 275 GTB models, as the mechanical layout was virtually identical. The standard road wheels were 7L x 14 in, fitted with 205 x 14 in tyres, of an elegant and smooth 10-hole alloy design, similar to those used on the sports racing competition Ferrari models of the period, with a knock-off spinner to the Rudge hub, with Borrani wire wheels available as an option.

All models in the series were fitted with four wheel Girling disc brakes, with a cable-operated handbrake actuating separate callipers on the rear discs. As with the 275 GTS, a hard top was available as an option on the 330 GTS during the production run, but was rarely specified.

A noteworthy ‘Speciale’ (although not by Ferrari) was the “Harrah Targa”, a conversion carried out in the USA on a 330 GTS (chassis 10913). William Harrah in Reno, Nevada, was the Western Region Ferrari dealer at the time of purchasing chassis 10913, and was famous for his enormous car collection. The conversion work to a Targa roof configuration (the first on a Ferrari model) was carried out in his workshops.