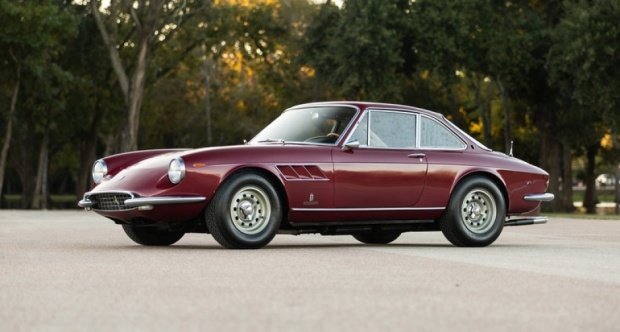 This model slotted in between the 275 GTB Berlinetta, whose chassis it shared, and the more tranquil 330 2+2 Coupé, from which it inherited its 4-litre V12 engine.

Presented at the 1966 Geneva Motor Show, it was an instant success: Pininfarina’s extremely elegant bodywork took after the 500 Superfast at the front and the 275 GTS at the rear. The 330 GTC remained in production until the end of 1968: 600 were built.

The body forward of the windscreen was very similar in style to the Ferrari 500 Superfast model. The 330 GTC was unusual for a Ferrari in that it had a model badge on the boot lid, proclaiming ‘330’. Prior to this only a very few cars had any model identity on them, and those that did were normally ‘Speciales’.

The nose featured a slim, projecting ovoid radiator grille, headlights in shallow recesses in the forward face of the wings, which had triple louvre engine bay exhaust outlets in their sides, bounded by a slim bright trim strip on three sides. This was married to a tail section that was first used on the earlier 275 GTS, to produce a harmonious, light and elegant design that featured slim quarter bumpers at each corner.

The 330 GTC had a cabin with very slim pillars, which gave an airy feel to the interior and excellent visibility.

The engine was an enlarged version of that fitted to the 275 GTB, and virtually identical in specification to that used in the late series 330 GT 2+2 models: a single overhead camshaft per bank V12 wet sump unit, with factory type reference 209/66, of 3,967 cc capacity, with a bore and stroke of 77 x 71 mm.

In the forward section was the chrome-plated gear lever with black plastic knob, moving in an open gate, with a chrome-lidded ashtray and cigarette lighter alongside it; electric window switches on a sloping face were just behind them.

These cars featured the nose section of the Ferrari 365 California, with a redesigned glass area to the cabin that had a concave, curved rear screen between buttressed sail panels that ran down to a Kamm tail, on which were a pair of triple circular lens tail light assemblies on a rectangular chrome-plated panel, above a full width wrap-around bumper.

There were detail differences between individual cars, the most noticeable of these being the engine bay exhaust air arrangement. On chassis 09439 and 09653 this was achieved by two rows of five rectangular slots along the trailing edge of the bonnet. Chassis 10107 and 10241 had small black louvre panels in the rear corners of the bonnet, in the style that would become standard for the then upcoming 365 GTC/S series.

There were other 330 GTC models constructed with individual special details. Amongst these was the prototype (chassis 06431), which has erroneously been reported as having been built on a 275 GTS frame (the build sheet indicates a type 592 chassis): it had a special instrument panel, door trim panels and rear luggage shelf. Chassis 08727 had pop-up driving lights in the nose panel, unique exterior trim and a special interior fitted for Battista Pininfarina.

The greatest deviation from standard (apart from the four ‘Speciale’ models) was chassis 09571, which had pop-up driving lights in the upper nose panel, covered headlights, a full rear bumper assembly, special door handles and a one-off instrument panel with no speedometer.