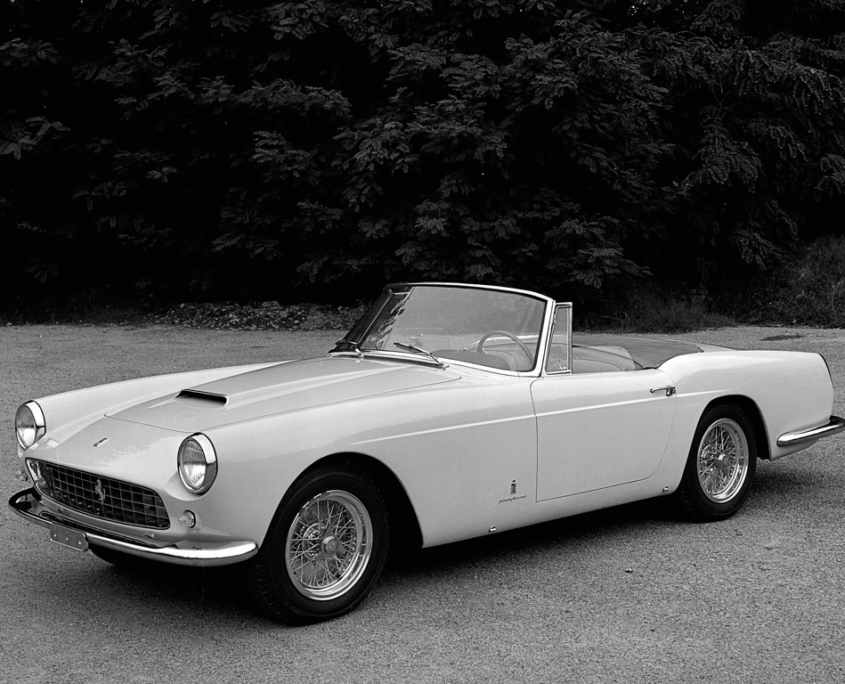 Pininfarina presented this two-seater spider at the Geneva Motor Show in 1957, a year after a similar proposal by Boano debuted at the same venue.

With its classic lines, the Pininfarina interpretation proved to be an instant hit with the more refined clientele.

Although there had been many successful spider-bodied Ferraris by the late fifties, cabriolets featuring proper folding soft tops had only been produced in relatively small numbers. Most of these were at the beginning of the decade, apart from subsequent, occasional one-off examples at the request of a specific client or as a design study on a show car.

When Carrozzeria Boano exhibited a 250 GT Cabriolet, chassis 0461GT, at the 1956 Geneva Salon, it was the beginning of a new era for this style of car in the Ferrari production programme, which led to the first series of Pininfarina-designed cabriolets produced during 1957 and 1958.

One of the early prototype examples produced by Pininfarina was more a spider than a cabriolet, as there was no provision for a folding hood on chassis 0663GT, which had a removable metal tonneau panel over the passenger area, with a low Plexiglass windscreen devoid of wipers, and a driver’s headrest that flowed into the tail panel, as on the sports racing cars of the period.

The bodies were constructed and trimmed by Pininfarina, before shipment to Ferrari for fitment of the mechanical components. A total of forty examples were built including the prototypes, in the chassis range of 0655GT to 1475GT, all but two of which were left-hand drive.

The first prototype, chassis 0655GT, which featured a cut-out in the top of the driver’s door to provide an arm rest, became the property of a Ferrari works racing driver, the Englishman Peter Collins. When he brought the car to England, he commissioned the installation of Dunlop disc brakes, and legend has it that upon returning to Italy, Ferrari dismantled the disc brake set-up from his car and borrowed it to use on a 250 Testa Rossa sports racing car for test purposes.