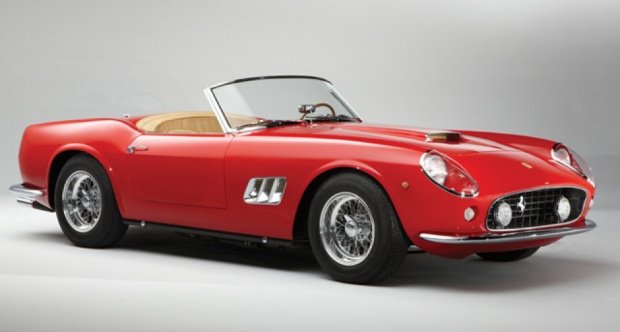 Thanks to Ferrari’s reputation in motor sports, and the work of importer Luigi Chinetti, the United States became an important market.

John Von Neumann, the west coast representative, thought that there was potential for an open Spider suited to the Californian sun, a sort of open 250 GT Berlinetta.

Constructed by Scaglietti in Modena, most of the cars were in steel with aluminium opening panels, with a few being entirely in aluminium. The ‘LWB’ models were built on a 2600 mm wheelbase chassis, which had factory reference number 508C, and then 508D, as on the ‘TdF’ berlinettas. All were numbered in the odd chassis number road car sequence carrying a ‘GT’ suffix, generally constructed along the same lines as those of the concurrent berlinettas, as were the mechanical components, like suspension, brakes, and steering, with all examples produced being left-hand drive.

The majority of ‘LWB’ cars had the single overhead camshaft per bank 3 litre V12 engine, with factory type references 128C and 128D, and a capacity of 2953 cc, with a bore and stroke of 73 mm x 58.8 mm, with spark plugs inside the vee of the block, to the same basic specification as the concurrent berlinettas.

The early examples were fitted with a single coil and distributor ignition system, later replaced by a twin coil and distributor arrangement, to produce a claimed 260 bhp. The bodies of the ‘SWB’ series of cars were very similar to those of the outgoing ‘LWB’ version, but were mounted on a new 2400 mm wheelbase chassis, that initially had factory reference number 539, and then 539/61, as on the concurrently produced ‘SWB’ berlinettas.

The new chassis reduced the overall height of the car by 30 mm; although barely discernible, it gave the car a squatter appearance than the earlier versions, but they are still difficult to tell apart. As noted relative to the engines, certain examples of both long and short wheel base cars had competition careers, probably due to a driver’s preference for an open GT car over a closed one, but maybe also to promote the model by use in competition.

The American driver Bob Grossman was one of the most successful exponents in a 250 GT California in competition, with a fifth overall at Le Mans in 1959 partnered by Fernand Tavano, in ‘LWB chassis 1451 GT. He also had numerous good results in national races in the USA during 1959 and 1960 in this car.

Movie provenance will generally elevate a car’s price up one or two categories, so a California Spider with no particular provenance at all will still command an eight figure price at auction. For example, during the Scottsdale 2017 auctions, a 1960 250 GT California Spider was passed in by Bonhams with a high bid of £8.6 Million, but failed to meet reserve.