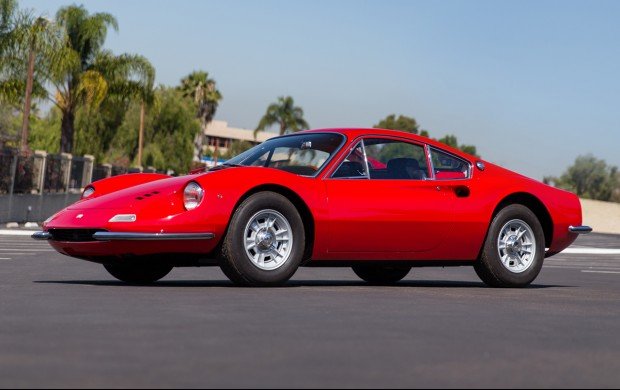 For Ferrari in the 1960’s it was becoming imperative to increase sales and reduce production costs. With the prototype of the Dino 196 S already in-house, there was an excellent opportunity to design a relatively small displacement, road-going version which, for the first time in Ferrari history, could be built on an assembly line.

Pininfarina came up with pretty, classic lines and the Fiat V6 was developed by Ferrari and engineered for transverse mounting amidships.

At the time, Ferrari could not hope to build that number of suitable units, so to enable them to compete, an alliance was forged with Fiat. Fiat would manufacture the engines and fit them into an upper market range of front-engined cars of their own, using the Dino name, and also supply engines to Ferrari for their own use.

All models, whether Fiat or Ferrari, would use the ‘Dino’ script badge.

From this first prototype followed another at the 1966 Turin Show, still with an in-line, mid-engined configuration. This featured an elliptical radiator opening with the headlights now wing-mounted under perspex covers.

There was a higher roof to the cabin, carrying a similar rear screen and sail panel profile to the original, with quarter bumpers at each corner, showing the evolution from concept car to production model.

By the time the next prototype appeared during 1967, the body was almost in its definitive form. The engine cover and boot lid were still one panel, and the strake in the door scallop had disappeared, fitted instead with door handles straight off the recently announced 365 GT 2+2, and alloy wheels that mirrored those fitted to the Fiat Dino. However, the most notable change was under the engine lid: the V6 had been turned through 90 degrees, to sit transversely, with a unitary 5-speed transmission assembly below and to the rear of it.

The design, development, and manufacture of the transmission were all done in-house by Ferrari.

Production commenced during 1968 and ran into 1969, when the 2-litre engine was replaced by a 2.4-litre unit and, with other detail changes, the Dino 246 GT was born. During the nine-month production period, around 150 examples of the Dino 206 GT were built, all of which were left-hand drive. The production cars were built on a 2,280 mm wheel base chassis, constructed to familiar Ferrari principles of longitudinal main tubes, with cross bracing and sub frames to support various components and the body, with factory type reference number 607. A new even number chassis numbering sequence was adopted under the Dino brand name for these cars, to distinguish them from the odd number sequence of the Ferrari road cars of the time.

The earlier prototypes had carried either Ferrari even competition series chassis numbers, or odd numbers in the road car sequence. The engine was of a 65o configuration, with chain-driven, twin overhead camshafts per bank, having a total capacity of 1,987 cc, with a bore and stroke of 86 x 57 mm, bearing factory type reference 135B. The cylinder block was cast in Silumin alloy, with cast iron liners, whilst the cylinder heads and various other castings were of a similar alloy. The engine was transversely mounted in unit with the all-synchromesh, 5-speed transmission assembly below and to the rear of the engine’s wet sump. It was fitted with a bank of three, twin choke Weber 40 DCN F/1 carburettors, mounted in the centre of the vee, with a distributor and electronic ignition system, to produce a claimed power output of 180 hp.