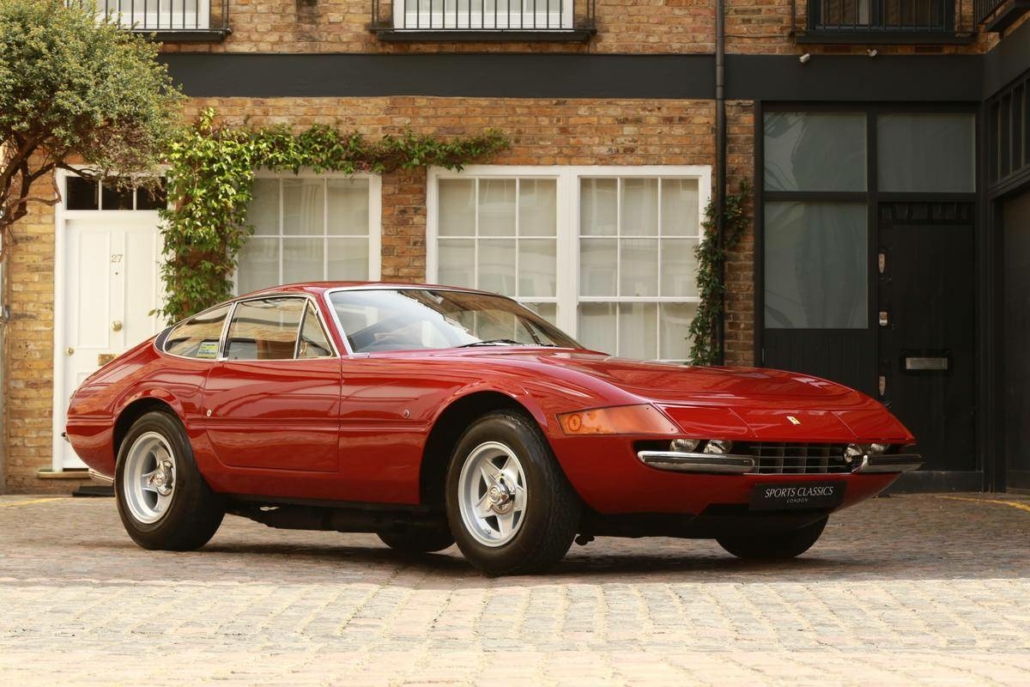 The evolution of the 275 GTB4 was a milestone in the history of extreme high-performance front-engined sports cars.

Sleek and modern Pininfarina lines were matched by a development of the 4.4-litre V12 engine fed by six Weber twin-choke 40 mm carburettors, and the excellent weight distribution provided by the rear gearbox transaxle produced a car of rare balance which guaranteed a unique driving experience.

Many fans know it by its unofficial name of “Daytona”.

This was the last new 12-cylinder Ferrari model announced before Fiat took over control of road car production in 1969, when they purchased 40 per cent of the share capital, with a further 49 per cent passing to them upon the death of Enzo Ferrari. It was also the last 12-cylinder Ferrari to be sold new in the USA (through official channels) until 1984, when the Testarossa was announced. This was due to the high cost for a low volume manufacturer of meeting increasingly strict legislative requirements.

The 365 GTB4 was even more aggressive in appearance than its predecessor, with the long, wide, and sharp, almost shark-like sweeping nose, with a large expanse of bonnet with twin rectangular exhaust air slots, running into the set-back cabin section, that flowed straight into the abrupt angled Kamm tail, on which were mounted a pair of twin circular light units above each quarter bumper.

The bodies were mounted on a 2400mm wheelbase chassis which had factory reference numbers 605, and all were numbered in the odd chassis number road car sequence. The construction was along the same basic lines as the others of the period, with large-section oval main tubes, cross bracing, and sub structures to support the body and ancillary equipment. Apart from the standard road cars, there were three series of five client competition examples built at the factory’s “Assistenza Clienti” department in Modena, along with an earlier one-off all-aluminium bodied car for Luigi Chinetti’s North American Racing Team.

The first series of five competition examples, built in 1971, had all aluminium bodies. They featured slightly flared wheelarches with wider wheels, aerodynamic “fences” on the front wings, a small chin spoiler, and a lack of quarter bumpers, as the main identifying features. The second series, produced in early 1972, had steel bodies with the aluminium bonnet, boot lid, and doors of the road cars, but with much increased flares to the wheelarches, to accommodate even wider wheels and tyres. The third series, produced in early 1973, were visually very similar to the series II cars, but had steel doors, with only the bonnet and boot lid in aluminium.

They received carefully built and balanced engines to racing standards, and some performance details were enhanced by the homologation of special parts over the period of production. The 30 September 1971 issue of the British magazine Autocar featured a road test, where they recorded a 0-60 mph time of 5.4 seconds, a 0-100 mph time of 12.6 seconds, a standing start quarter mile time of 13.4 seconds at a terminal velocity of 104 mph, and a top speed of 174 mph, a figure that remained as their road test record for a number of years.

The November 1974 issue of the American magazine Road & Track featured a track test of a competition version, recording the following times, a 0-60 mph time of 5.8 seconds, a 0-100 mph time of 12.6 seconds, a standing start quarter mile time of 14.5 seconds at a terminal speed of 107.5 mph, and a top speed of 186 mph, which were not vastly different to the figures recorded by the British magazine Autocar for the standard road version.

However, an improvement in lap times on a race track would come about through the stiffer suspension, wider wheels and racing tyres of the competition model, but it also serves to show how good the performance of the standard car was.