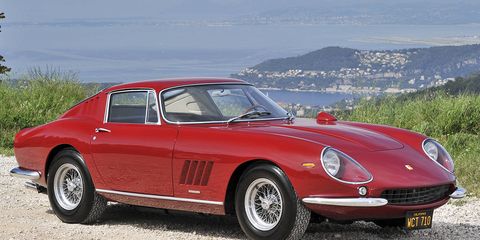 Presented at the 1966 Paris Motor Show, this was the first ‘production’ Ferrari to be fitted with the four overhead camshaft version of the V12, and was derived directly from the P2 prototype.

The 275 GTB/4 was virtually identical visually to the “long nose” two camshaft models, and without lifting the bonnet, there was only one easy distinguishing feature. This was the profile of the bonnet, which on the 275 GTB/4 had a slim shallow central bulge running from front to rear. This should not be confused with the wide flat raised centre section of the bonnet seen on early two camshaft cars.

As with the two camshaft cars, the Pininfarina designed body was constructed by Scaglietti, normally in steel with aluminium doors, bonnet, and boot lid, although a few examples received full aluminium bodies.

The basic dimensions and layout of the engine were similar to that of the two camshaft unit of the 275 GTB, but fitted with new cylinder heads that featured twin overhead camshafts per bank of cylinders, with factory type reference 226, still of 3286cc capacity, with a bore and stroke of 77mm x 58.8mm, with the sparking plugs sited between the camshafts.