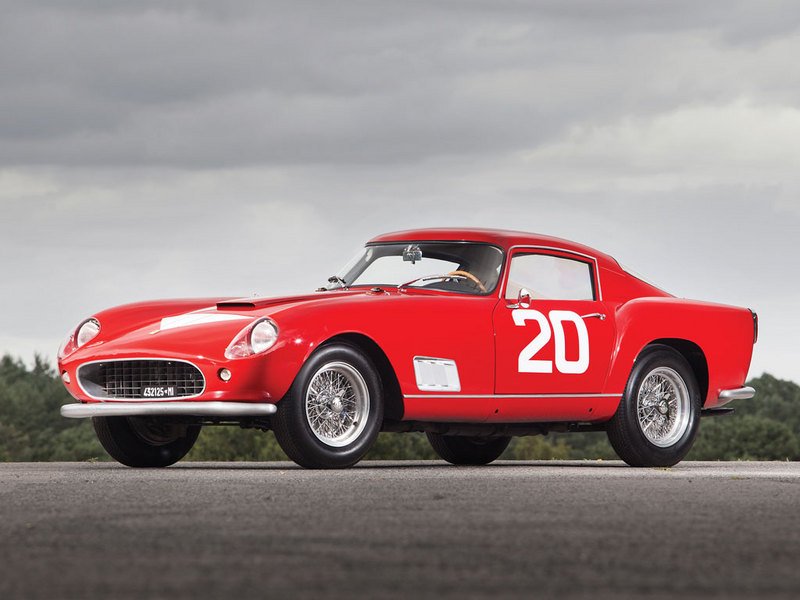 This was the first model in the legendary berlinetta series. These cars were not only perfect for driving to the track, but also for racing (and winning!) on it.

The “Tour de France” series of cars were the competition orientated berlinetta versions of the 250 GT road cars, designed for racing in the GT category, and were produced from 1956 to 1959.

The “Tour de France” part of the model title came from the great French endurance event for cars, rather than the even more famous one for bicycles of the same name. The body shape underwent four evolutions during the production run, the first version in 1956 being very similar to the design seen on the 250 Europa GT berlinettas during 1955, but with tauter lines having a slimming effect on the appearance.

In early 1957 the body underwent its first alterations, to provide a separate horizontal rear wing line with vertical light assemblies, in place of the rounded tail on the 1956 model. At the same time the wrap around rear screen was replaced by a smaller flatter Plexiglass screen bounded by sail panels featuring a row of fourteen tapering cabin exhaust air louvres.

In 1959 the early models of the year were very similar to the 1958 model, except that the headlights were uncovered in shallow recesses at the wing extremities due to changes in Italian lighting legislation, although some foreign market cars retained a covered light arrangement, and the sail panel louvres became a single outlet. Equally, some earlier cars were changed to the open headlight layout at this time, when returned to the factory for maintenance or repair.

The single overhead camshaft per bank 3 litre V12 engine, with factory type references 128, 128B, 128C and 128D, each being a progressive development of the Colombo designed “short” block unit, maintaining the capacity of 2953cc, with bore and stroke of 73mm x 58.8mm, and still with sparking plugs inside the vee of the block, fitted with a bank of three twin choke Weber 36 DCL3 or 36 DCZ3 carburettors, with a twin coil and rear of engine mounted distributors ignition system, to produce a claimed 260bhp.

Some of the very last examples in the series were fitted with the outside sparking plug 3 litre V12 type 128 DF engine.

The engine was coupled to a four speed all synchromesh gearbox, that initially had either a central or an offset lever position, but from 1958 a revised gearbox with central lever became a standard fitment, driving through a prop shaft to the rigid rear axle, for which a range of ratios were available.