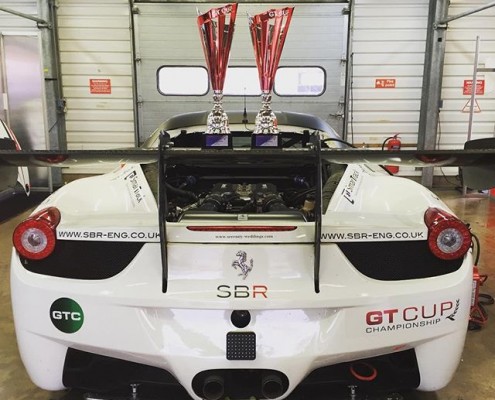 As many of you will know we first took delivery of this car back in 2011 when it was a brand new challenge car. Over the years we developed it with an aerodynamic package and bespoke dampers that we developed on our 430 CTC car etc. It was used in The Pirelli Open and British GT.

So 2016 saw the car come out of semi retirement to compete in the GT Cup Championship. Our brief from the cars owner, Paul Bailey, was he wanted to win the GTC class as he won the GTO class in 2015 in one of his Aston Martin GT3 cars, and wanted to come back in a Ferrari.

The season had its ups and downs, and the car was plagued by electrical and gearbox issues. Knowing the car well we manged to nurse through the season ,Unfortunately the car did not make the last round due to an engine component failure, but we did managed to collect enough points for a clear win in the GTC class.

A big thank you to everyone who supported us through the season and to the guys at SBR who put in the time to get the results. Also a big thank you to Paul for letting us support and prepare his cars..

See you all next year!