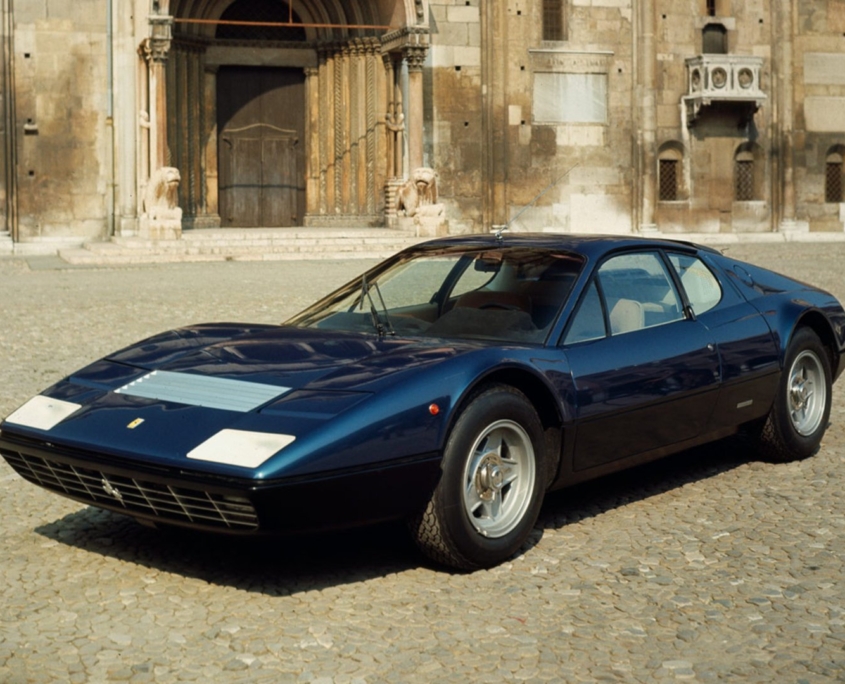 There were two important novelties on this car: the new 12-cylinder boxer derived from the Formula 1 car, and the mid-engined layout that marked the end of Ferrari’s traditional front-engined solution for its top performance models.

The 365 GT4BB made its public debut on the Pininfarina stand at the 1971 Turin Show, but it would be almost two years before it reached the production line, where it would run until 1976. No doubt the long gestation period was due to it being a completely different concept to any previous Ferrari 12-cylinder series production road car, with its mid-mounted flat-12 engine in unit with the transmission.

The model title followed standard Ferrari practice, with the number “365″ referring to the swept volume of a single cylinder, the number “4″ relating to the total number of camshafts, and the “BB” suffix stood for “Berlinetta Boxer”. The “Boxer” part of the model name was a reference to the opposing banks of cylinders’ operating order.

Visually the forward section of the model was based on the extreme wedge Pininfarina P6 mid-engined concept car, presented at the Turin Show in 1968. The bodies were mounted on a 2500mm wheelbase chassis that had factory reference numbers F 102 AB 100, all were numbered in the odd chassis number road car sequence.

The engine was the first flat-12 cylinder configuration fitted in a Ferrari road car, but maintained the same cubic capacity of 4390cc, and 81mm x 71mm bore and stroke, of the 365 GTB4 model, and had factory type reference F 102 AB 000.