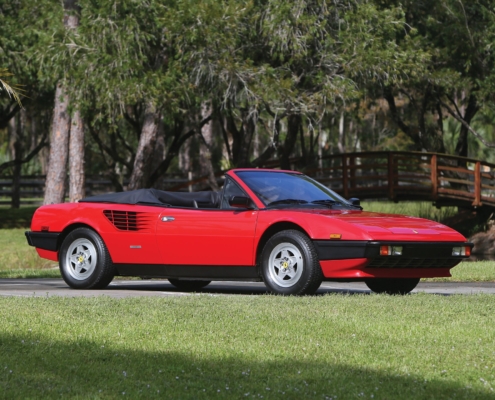 Nine years after its last open-top car (the 365 GTS4) had gone out of production, Ferrari came back with a 2+2 spider.

By a bit of canny engineering, Pininfarina managed to give the canvas top the same line as the coupé.

In fact, it extended rearwards to include the two buttresses either side of the rear window, and Pininfarina’s clever mechanism allowed the hood to fold away neatly behind the seats.

Despite the absence of a roll-bar, the lack of a roof was compensated for by the strong tubular chassis to which the aluminium body panels were welded, guaranteeing the structural rigidity expected of a car capable of 240 km/h.

The main European market Mondial Cabriolet models had a tubular chassis with factory type reference F 108 BS 100, which featured a bolted rear sub-frame section, so that the complete engine, transmission and rear suspension assembly could be removed as a single unit, for ease of maintenance.

As with the concurrent 2 seater models both right and left hand drive was available, together with various world market specification models.

Mondial Cabriolet models were produced prior to the chassis number 75000, from which point both odd and even numbers were used for chassis numbers, thus all cars in this series carry odd number only chassis numbers.