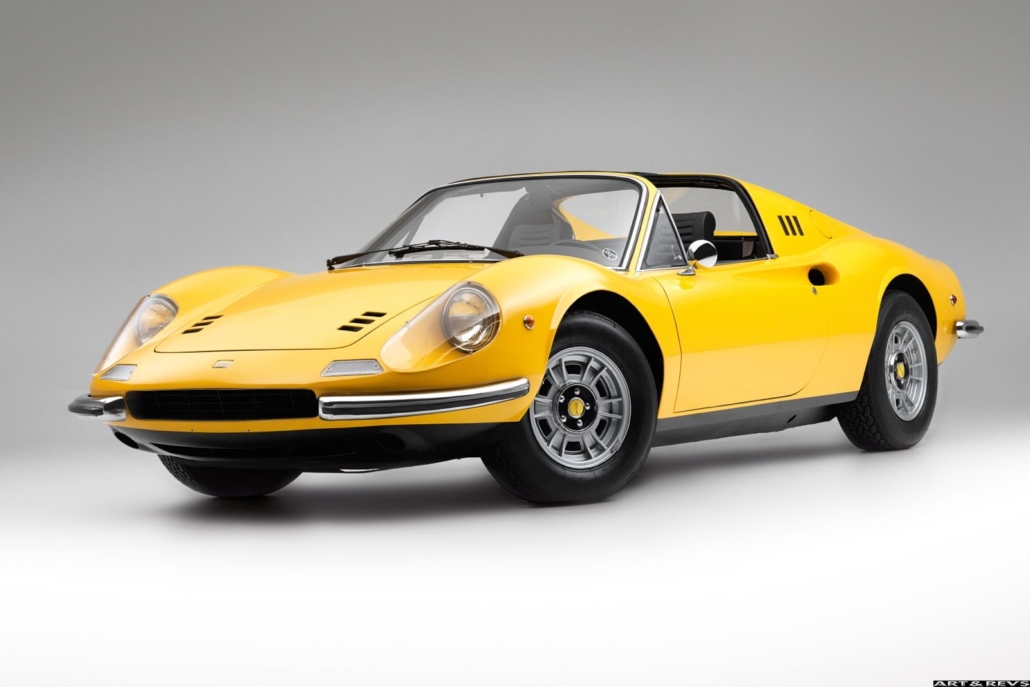 The Dino 246 GTS was an evolution of the Dino 206 GT and 246 GT, with a larger V6 engine and a wheelbase lengthened by 60 mm. Apart from the longer body, the design was virtually identical, with just a longer engine cover and a repositioned fuel cap.

The car proved commercially very successful, and three series were produced during its life span. When production stopped in 1973-4 demand was still high. The Dino 246 GT made its official debut at the Turin Show in November 1969, although the production run had already commenced.

A total of 81 examples were completed by the end of the year. Visually the 246 GT was almost identical to the 206 GT that it succeeded, apart from the fuel filler cap being under a flush fitting flap on the left sail panel. In reality there were more differences than initially met the eye. Apart from the increase in engine capacity from 2 litres to 2.4 litres, the engine block material was changed from aluminium to cast iron. Also not apparent from a casual glance was the change to the wheelbase, which was 2280mm on the 206 GT, and 2340mm on the 246 GT, with a corresponding increase in overall length. An increase in diameter of the paired twin exhaust pipes could also be noticed. Broadly speaking, series “L” cars were produced in late 1969 and through 1970.

They have road wheels with a single knock-off spinner, front quarter bumpers into the grille opening, rear licence plate lights in the quarter bumper ends, an external boot lid release button and head rests mounted on the rear bulkhead. The body material was steel with an aluminium front lid.

The 246 GTS model with a black finished removable roof panel was introduced in the spring of 1972 at the Geneva Show. Apart from the removable roof panel, it can be identified by the omission of the rear quarter windows, which were replaced by a plain metal sail panel with three rectangular cabin exhaust air slots. Late in the production run, wider Campagnola wheels of a different design from the standard Cromodora ones, coupled with flared wheel arches, were offered, as were “Daytona” pattern seats, which had a different, more elaborate stitch pattern with thin horizontal bars to the centres, which earned the package the epithet “Chairs and Flares”. The engine was again of 65 degree configuration, with chain-driven twin overhead camshafts per bank, having a total capacity of 2418cc, with a bore and stroke of 92.5mm x 60mm, bearing factory type reference 135 CS. The cylinder block was cast iron, whilst the cylinder heads and various other castings were of a silumin alloy.

The engine was transversely mounted in unit with the all-synchromesh five-speed transmission assembly, which was below and to the rear of the engine’s wet sump. It was fitted with a bank of three twin-choke Weber 40 DCN F/7 carburettors on Series “L” and “M” cars, with 40 DCN F/13 models on Series “E” cars, mounted in the centre of the vee, with a distributor and electronic ignition system, to produce a claimed power output of 195 hp.