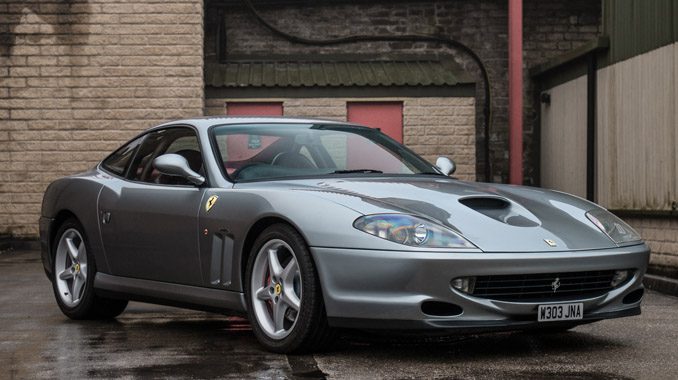 Launched to the press at the Nürburgring in 1996, the 550 Maranello was Ferrari’s answer to those who believed the performance of a front-engined V12 car could not beat that of a mid-engined sports car.

The successor to the F512M, the 550 Maranello proved quicker and, thanks to its better front-engined, rear drive packaging layout.

The body lines from the pen of Pininfarina unsurprisingly had echoes of the new model’s 2+2 stable mate, the 456 GT, in the overall premise. However, there were also retro hints from earlier classic models, like the twin exhaust air slots in the front wings akin to those of the sixties 250 GTO and 275 GTB, whilst the tail light treatment was even closer to that of the fabled 365 GTB/4 “Daytona” model than it had been on the 456 GT.

Technological advances during the intervening period, particularly with regard to suspension and traction control systems with electronic brains, meant that a front engine car could be made to handle as well as a mid engine model. One feature carried over from the preceding F512M model was the use of high intensity homofocal covered headlight units, that obviated the necessity of the retractable units of the 456 GT, and thus gave the car a homogeneous line whether the lights were in use or not.

The interior was upholstered in leather as standard, with electronic adjustment facilities for the seats, and a large luggage platform behind them. Twin airbags were provided, as was air conditioning, electric windows and door mirrors, plus a stereo system with CD player. As an option sports seats were available, along with a range of items from the “Carrozzeria Scaglietti” personalisation accessories that were introduced in 1997, to enable clients to individualise their cars.

In 1999 a limited series of thirty three “World Record” examples were produced to commemorate the World Speed Record set at Marysville in the USA on 12 October 1998. Here the 550 Maranello broke the world speed record for a production road cars, covering 100kms at an average speed of 192.60mph, and covering 184.164 miles in one hour, despite making a stop to refuel.