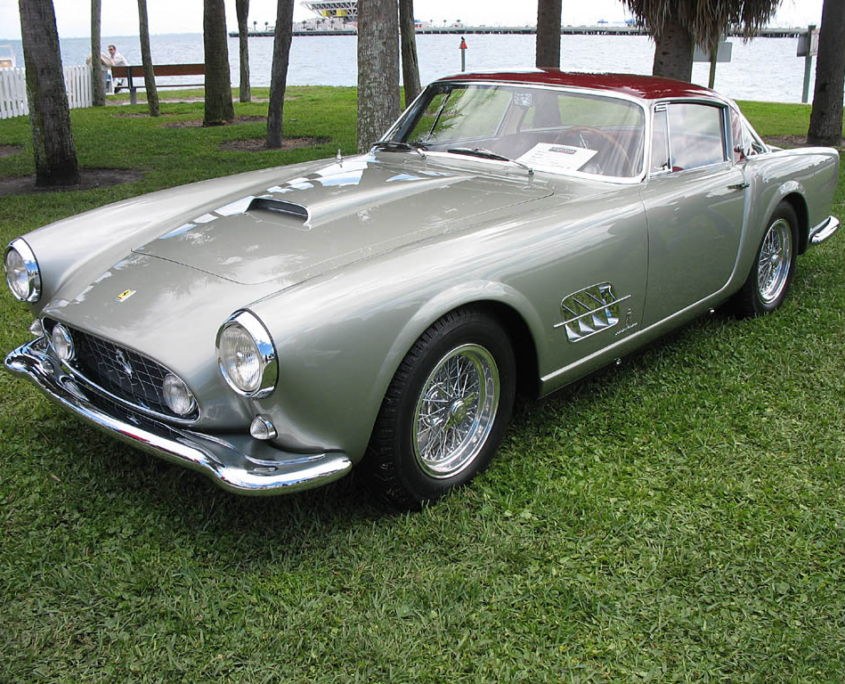 The engine that was to equip the 410 Superamerica was presented on the chassis of the 375 America at the Paris Motor Show in October 1955.

The car itself was unveiled to the public later, at the 1956 Brussels Motor Show. The elegant bodywork with its impressive dimensions was the work of Pininfarina.

It is a curious fact that this model, which was destined for series production, actually gave rise to a number of competition versions, reverting to Ferrari’s customary practice.

The one-off coachwork offerings for these Series I and II cars were among the most bizarre ever to grace a Ferrari chassis.

Pininfarina produced two entirely different “Superfast” studies. The first was shown at the 1956 Paris Salon, on chassis # 0483SA, featuring a cantilevered roof with no front screen pillars (later added before sale), with emphatic tail fins incorporating triangulated rear light assemblies in the trailing edge. It was finished in a white over pale metallic blue colour scheme, split by a chrome trim that circumnavigated the car from either side of the wide oval radiator grille.

The chassis’ for the Series I and II cars, with factory type reference 514, whether 2600 mm or 2800 mm wheelbase, were numbered in the odd number road car sequence carrying an “SA” suffix, and were similar in concept to the concurrent 250 GT units, whereby the main chassis tubes passed above the rear axle, as opposed to under the axle on the 375 America.

The front and rear track was also increased over that of the 375 America. The suspension was independent at the front, via wishbones with individual coil springs and shock absorbers, whilst the rigid rear axle was supported on semi elliptic leaf springs, and fitted with hydraulic shock absorbers. Hydraulically operated drum brakes were fitted all round, with a cable operated handbrake to the rear wheels.

The chassis’ for the Series III cars, with factory type reference 514/A, with a 2600 mm wheelbase, were also numbered in the odd number road car sequence carrying an “SA” suffix, and the mechanical components of the chassis were as those of the preceding series.

The Pininfarina designed body style was common to all cars in the series, apart from the original show car prototype, that had a five window glass arrangement, all subsequent examples being fitted with a three window arrangement. However, individual differences continued to exist, the most noticeable being with the headlights, some cars having open lights, and others with them recessed in the front wings under Perspex covers.

Values vary slightly as always, but expect to pay over $2 Million!