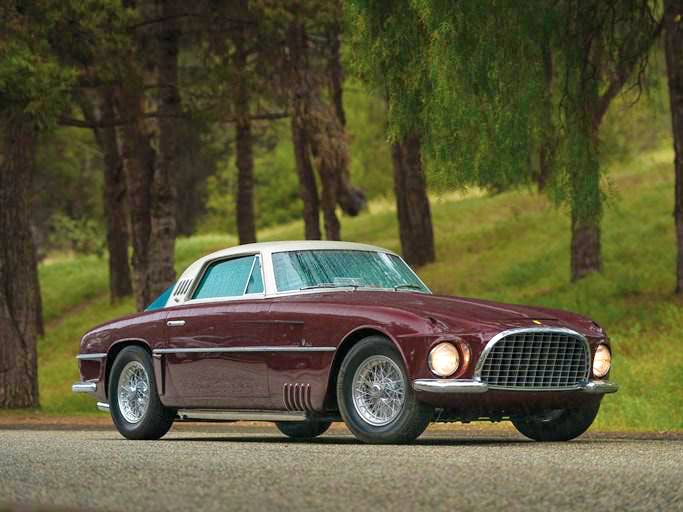 Heir to the 342 America, this model was aimed at the same segment of the market, but the Colombo-designed V12 was dropped in favour of the Aurelio Lampredi version that featured cylinder heads with twin inlet tracts.

The 375 America model was first displayed at the 1953 Paris Salon in Pinin Farina three window coupé form, with a duo tone paint finish, the shape of which was a refinement of that seen on the Pinin Farina offering on the 212 Inter model of 1952-53. It used virtually the same 2800mm wheelbase chassis as the concurrent 250 Europa, and they were similarly numbered in the odd number road car sequence but carried an “AL” (America Lungo) suffix.

The engine was a development of the Lampredi designed “long” block V12, with a capacity of 4522cc, and a bore and stroke of 84mm x 68mm, fitted with a bank of three twin choke Weber 40 DCZ or DCF carburetors, twin coil and distributor ignition, to produce a claimed 300bhp.

The engine was coupled to a four speed all synchromesh gearbox, which carried the drive through a universally jointed propeller shaft to the rigid rear axle, for which a variety of ratios were available, depending whether the client wanted searing acceleration or relaxed high speed cruising.

Full uniformity of style had still not been achieved, as even among the “standard” Pinin Farina coupés one could find detail differences, like the radiator grille surround being plain, or fitted with chrome plated trim rings of varying widths, and specific detail changes to suit a particular client’s requirements.

The 375 America pictured here sold at auction for nearly $5 million in 2018. It was the first one to come up for sale publicly for many years..