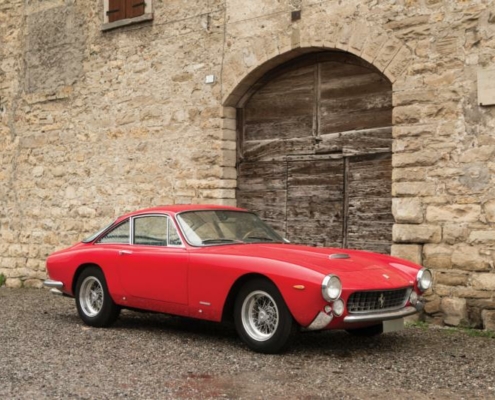 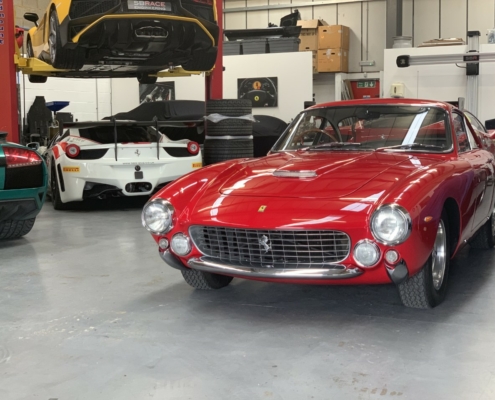 The 250 GT Berlinetta Lusso, which made its debut at the 1962 Paris Salon, was the final model in the 250 GT series in pure road car form and continued in production until the latter part of 1964, by which time 350 cars had been produced. It was the direct replacement for the 250 GT Coupé, as although there was a ‘Lusso’ street version of the 250 GT ‘passo corto’ Berlinetta, this didn’t have an excess of interior or luggage space.

The prototype of the series was shown at the Paris Salon and also featured in the sales catalogue, had a small central vertical bar to the grille on the hood intake, 250 GT 2+2 style door handles, no driving lights in the front panel, and separate circular reflectors, rear and turn lights in the tail panel.

The production cars had a plain mesh to the hood intake, with a large circular combination rear/turn/reflector light unit on each side of the recessed tail panel. The bodies were constructed from steel with aluminium opening panels (doors etc.), and mounted on a 2400 mm wheel base tubular steel chassis with factory reference number 539/U. All were numbered in the odd chassis number road car sequence carrying a ‘GT’ suffix. The interior was leather trimmed with a pair of deep bucket seats, behind which was a luggage platform with leather straps and a diamond quilted cover panel to the top of the parcel shelf.

The instrument layout was unusual in that the two main dials –speedometer and rev counter – were housed in a pair of large circular binnacles that protruded from the top centre of the dashboard, and were angled towards the driver, with the supplementary gauges in a horizontal panel directly in front of the steering wheel.

The Lusso is widely celebrated as one of the most exquisitely proportioned Pininfarina-designed Ferraris ever built, it has been widely sought by hundreds of enthusiasts, each of whom wanted one to call his or her own.

Celebrity enthusiasts such as Steve McQueen and Eric Clapton each owned one, only adding to the Lusso’s allure and value.

With 350 produced by the end of the second and final year of production in 1964, this was a car clearly destined to become a future classic and stay so.