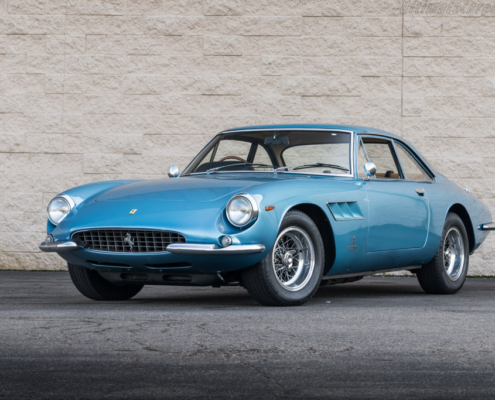 This model, targeted at clients looking for uncompromising performance in a luxury car, was presented at the 1964 Geneva Motor Show. Derived from the 400 Superamerica, it was fitted with a special engine which benefited from the work of both Colombo and Lampredi. With three 40 DCZ/6 Webers, it boasted 400 bhp, which placed the car at the top of its class. Twenty-five units with a 4-speed gearbox were built during the first series. In 1966 a second series of twelve cars came out, which had additional speed. A total of thirty-six examples were produced in the chassis number range 05951SF to 08897SF, whilst a one-off 330 GT 2+2 (chassis 06267) was produced with a Superfast-style body for HRH Prince Bernhard of The Netherlands.

Clients for this exclusive form of transportation, which cost as much as two Rolls Royce when new, included the Shah of Iran (who bought two within four months in 1965) and the British actor Peter Sellers. Early examples in the series had 11-slot engine bay exhaust vents in the front wings, succeeded later by a triple louvre assembly, as had happened on the 330 GT 2+2 and 275 GTS models. Despite the change to alloy wheels as standard to Ferrari road cars of the period, the 500 Superfast was fitted with 7L x 15” Borrani wire wheels throughout the production run. As with the 400 Superamerica, the number in the model designation referred to the total cubic capacity of the engine (in the case of the 500 Superfast, five litres), rather than the swept volume of an individual cylinder. The engine was a single overhead camshaft per bank V12 unit, with factory type reference 208, a total cubic capacity of 4,963 cc, and a bore and stroke of 88 x 68 mm. There was an outside the vee spark plug arrangement, a bank of three twin choke Weber 40 DCZ/6 carburettors, and a twin coil and rear of engine-mounted distributor ignition system that produced a claimed 400 bhp.