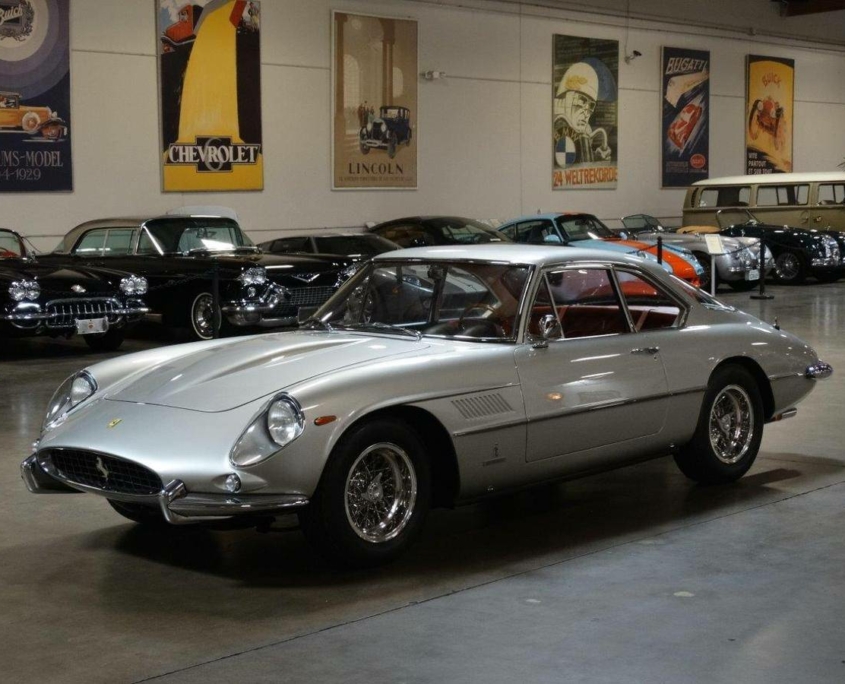 Produced in two series between 1960 and 1964, the 400 Superamerica was one of those flagship models created in response to customer demand. A big, 4-litre V12, with loads of power and massive torque, sober yet luxurious interior, firm suspension settings that didn’t compromise on comfort, and a gearbox with overdrive.

The cars were all bodied by Pininfarina and included spider, cabriolet and aerodynamic coupé versions, as well as the famous, one-off Superfast models: II, III and IV.

The chassis, with factory reference number 538, initially with a 2420 mm wheel base and then with a 2600 mm wheel base to increase interior space, were numbered in the odd number road car sequence carrying an ‘SA’ suffix. They were constructed along the same general lines as those of the concurrent 250 GT series, with a pair of large section, oval longitudinal tubes passing over the rear axle and substantial cross bracing, plus a built-up front cross-member. Similarly, the suspension was independent at the front, via wishbones with individual coil springs and shock absorbers, whilst the rigid rear axle was supported on semi-elliptic leaf springs, and fitted with radius arms, whilst hydraulic shock absorbers were provided to each wheel.

Hydraulically operated disc brakes were fitted all round, with a cable operated handbrake to the rear wheels. Apart from chassis 2311SA, all were left-hand drive. The engines, with factory type reference 163, had a compression ratio of 8.8:1, and were a departure from the ‘long’ block Lampredi-designed engines used in the preceding 410 series of cars. Instead they had a ‘short’ block motor, based on the original Colombo SOHC per bank design used in the concurrently produced 250 GT series. This was stretched to increase the capacity, by enlarging the bore to 77 mm and lengthening the stroke to 71 mm, providing a total capacity of 3967 cc.

The first example was a one-off, special-bodied car built for Fiat supremo Gianni Agnelli, on chassis 1517SA, in late 1959 and presented at the Turin Salon that October. The design featured a large square radiator grille that extended almost to the bottom of the front valance, with quarter bumpers either side of it.

There were also current American styling elements: a horizontal twin headlight layout at the wing extremities with a single fog light below it, and a wrap-around windscreen. The tail light treatment was a vertical chrome bezel to each wing, incorporating three circular lenses, which would subsequently see series production on the 400SA cabriolets, early coupés and the 250 GTE series which began in 1960.

Between the Turin Salon and delivery to the client at the end of May 1960, the design was refined. The frontal metalwork was modified to reduce the size of the radiator grille, which still remained square in shape, now with a full width bumper running below it. The horizontal inlets that had originally featured above the quarter bumpers disappeared, the shape of the bonnet air intake was also altered, and a bright metal trim strip was added along the body side swage line to accentuate this feature.

The second example, and the first of the true production series, was a cabriolet, chassis 1611SA, which made its public debut at the Brussels Salon in January 1960, then went on to be displayed at the New York Show a few weeks later. The 400 SA Cabriolet was similar in overall shape to the 250 GT Cabriolet of the period, although it had a shallower grille opening, normally with uncovered fog lights in the grille extremities, and occasionally an additional central driving light. As these were extremely expensive, limited production cars, individual clients could have them personalised. Thus, no two cars had exactly the same details. One of the clearer options was the availability of open headlights or recessed units under Plexiglass covers. When the open light option was specified on a ‘coupé aerodinamico’, the whole frontal aspect of the car changed from the projecting oval radiator grille shape, to that used on the cabriolets. One example, chassis 2311 SA, received a body virtually identical to the 250 GT California Spider, with right-hand drive, built specifically by Scaglietti for Ferrari board member, Michel Paul-Cavallier. Another, chassis 3673SA, had a body in the style of the 250 GT ‘passo corto’ berlinetta. It has been erroneously reported that Enzo Ferrari used an example wearing a 250 GTE 2+2 body, but factory records confirm that this was a normal 250 GTE, chassis 2257GT. The ‘coupé aerodinamica’ for the 400 Superamerica coupé evolved from a design study shown by Pininfarina on their stand at the Turin Salon in November 1960.

The second full iteration of the design on the same chassis was called Superfast III; displayed at the Geneva Salon in March 1962, by this time it featured a revised cabin glass area with new slimmer C-pillars and larger rear quarter windows. At the front the nose profile was altered to provide a very shallow, elliptical radiator intake with a thermostatically controlled, metal cover panel adorned with a ‘Cavallino Rampante’. Meanwhile the model had gone into series production, with the first customer version being exhibited at the 1961 Geneva Salon. This had most of the design features of Superfast II, except that the headlights were more traditional units under Plexiglass covers recessed in the front wings. As previously noted, there were individual differences to specific cars. Apart from the open or closed headlight option, there were alternative door handle assemblies (a conventional chrome-plated with push button, or a recessed lever type), whilst some cars had rear wheel spats fitted but others did not. Those built until the middle of 1962 had the 2420 mm wheel base, while those built later had the 2600 mm wheel base.