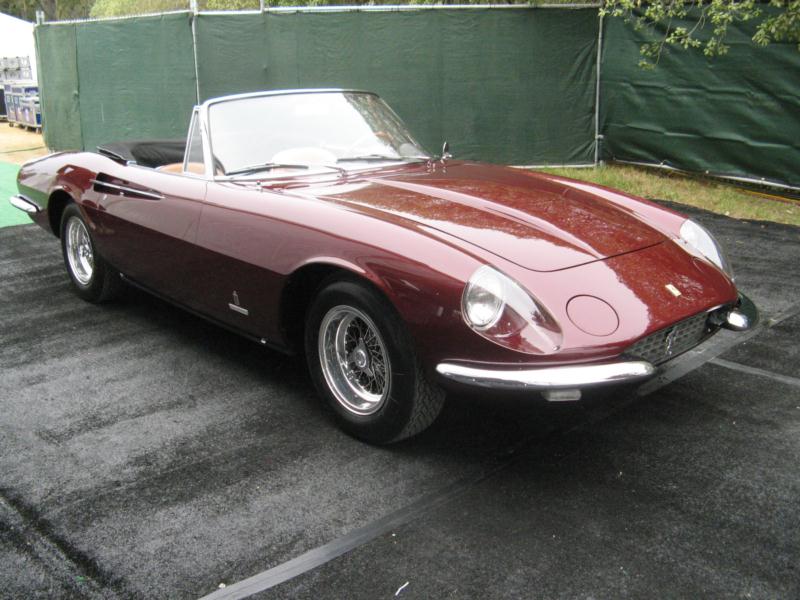 Presented at the 1966 Geneva Motor Show, this was one of the most memorable interpretations of the Italian open sports car theme.

Pininfarina enclosed the sophisticated 4.4-litre V12 engine in a body of rare beauty, making it the benchmark in the high performance luxury sports car category.

The car’s high price and exclusive image meant it was destined for the most elite section of the market, and only 14 were built.

Like the 500 Superfast, the chassis’ were sent to Pininfarina who bodied and trimmed them at their plant in Grugliasco, and then returned them to Ferrari for the fitment of the mechanical components.

Apart from cosmetic ancillary details, like the standard Plexiglass covered headlights, hidden swivelling driving lights in the upper nose panel, a lack of vents on the wing sides, the provision of a central bonnet bulge, and a body side crease line, the 365 California was visually similar to the 500 Superfast model from the windscreen forward.

As with the 500 Superfast the 365 California featured tail light assemblies that were unique to the model, being angular units to suit the shape of the tail corner, with triple circular lenses in a reflective surround. However, there were differences between the reflector colours and even the lens units on individual cars.

Again, as on the 500 Superfast, quarter bumpers were provided to each corner, although one example, chassis # 08631, was fitted with a full width rear bumper, and concurrently an amended tail light layout, when refurbished at the factory in 1970. The Borrani wire wheels stayed in place on this model, even though most of the mainstream Ferrari production cars had cast alloy wheels as standard equipment.

The bodies were mounted on a 2650mm wheelbase chassis that had factory reference number 598, and all were numbered in the odd chassis number road car sequence, without any suffix letters. They were constructed along similar lines to the concurrent 330 GT 2+2 model, and featured similar independent front suspension, rigid rear axle with leaf springs and telescopic shock absorbers, four wheel disc brakes, with separate front and rear hydraulic circuits, and the model was fitted with the power assisted steering that was optional on late series 330 GT 2+2 models.