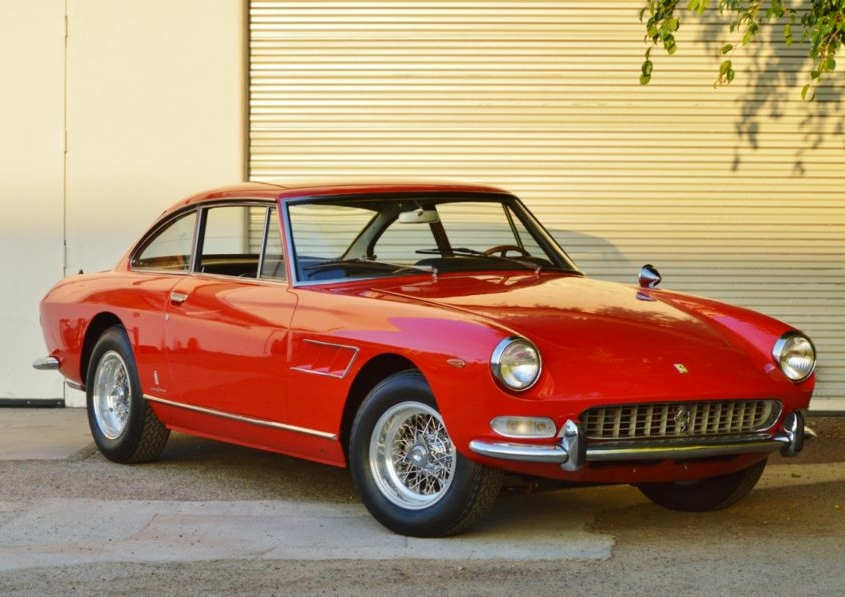 It was fitted with the new 4-litre Type 209 V12, which sported a slightly longer engine block than the 400 SA series from which it was derived.

The 330 GT 2+2′s elegant line was the work of Pininfarina, and two series were built.

These differed principally in the front end treatment; the first series (1963-1965) having four headlights and the second (1965-1967) just two. Around 1,000 examples were built in all. As with its predecessor, the body design of the 330 GT 2+2 was from the pen of Pininfarina. It was very different, however, featuring a canted twin headlight arrangement, with a 7 in diameter outer lens and a 5 in diameter inner, echoing the layout shown on the 400 Superamerica Superfast IV (chassis 2207SA). This gave the frontal aspect a slightly American look, as dual headlights were very much in vogue there.

Series II example came into being when the frontal treatment was altered around the middle of 1965. At that time, the twin headlight arrangement was replaced by a single unit, which gave a frontal aspect very similar to that of the concurrently produced 275 GTS model. At the same time, the Borrani wire wheels (for so long a standard part of Ferrari attire) gave way to ten-hole cast alloy wheels, still with the knock-off Rudge hubs, although the wire wheels remained available as an option.

The bodies were mounted on a 2650 mm wheel base chassis that had factory reference number 571 (series I) and then 571/65 (series II). All were numbered in the odd chassis number road car sequence, in the range 4963 to 7533 for Series I models, and 7537 to 10193 for Series II. Construction was to standard Ferrari practice for the period: large section oval main tubes with substantial cross bracing, and sub assemblies welded to the main frame to support the body and ancillary equipment.

The engine was a single overhead camshaft per bank 4-litre V12 unit, with factory type references 209 and then 209/66, a total cubic capacity of 3967 cc, and a bore and stroke of 77 x 71 mm. It had an outside vee spark plug arrangement, fitted with a bank of three twin choke Weber 40 DCZ/6 or 40 DFI carburettors, a twin coil and a rear of engine-mounted distributor ignition system producing a claimed 300 bhp.

The engine was based on the original Colombo ’short’ block design, but was slightly longer with increased bore centres to provide adequate waterways with the larger diameter cylinder bores.